Morning’s fierce north wind calmed to a gentle breeze, and by early afternoon the air was swinging gently from north to east, a lazy pendulum of a breeze, losing momentum as the temperature rose. Almost-still air amplified traffic noise from M-22, as well as occasional snowmobiles (heard but not seen). Even with cloud cover, the snow on the ground was blinding. White of sketchbook paper looked lavender by comparison with white of snow. 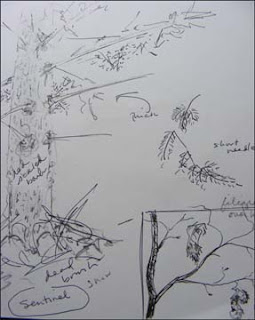 Directly east from the house, beyond the meadow and past the newest orchard trees, a line of straggly trees demarcates the old 80-acre line, and behind that line, as the land climbs from a stream to the north to wooded hills farther south, there have long been two small clearings. One of the trees dominating the line from a distance is a tall, short-needled conifer. Spruce? Its lower branches have been hacked off to make room for the easier passage of orchard equipment, but the tree remains very much a sentinel. Even close up, its height is obvious. Behind and on the hill above the sentinel the small clearings are beginning to fill in. 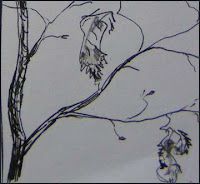 This small bit of land is in transition, not only between orchard and woods but also as the clearings evolve from grasses to brambleberries and tree seedlings to larger saplings and shrubs, almost as if the woods to the north and south yearn to reconnect and are reaching across to close the breach.

There are popples in this transition area (the pioneer tree of the region, not found in mature woods) and also young beeches and maples and ash trees and very small firs. Overhead the smallest branches and twigs of young beech trees criss-cross and interlace in a delicate filigree, the highest twigs graced with clusters of small catkins, two to four in a cluster. Perhaps deer have eaten lower ones. 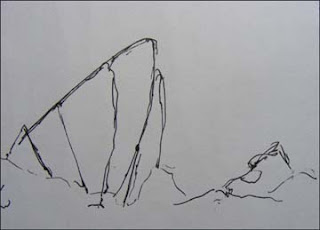 Without yet a thick, mature forest canopy, grasses still grow thickly here, bowed over at present by snow, their heads buried, and the ground is not smooth and flat but lumpy with snow-covered vegetation and full of air pockets. It looks ideal for sheltering small rodents. Not one is stirring aboveground today, and there are no tracks in the new snow in the clearing, but many small animals may be tunneling underneath the snow. Once a dead grass stalk gave a sudden, quick, unnatural jerk, nothing like a wind-caused movement but more as if something had passed by underneath the snow and collided momentarily with the stalk.

A very old, gnarled tree, long dead, continues to stand, although it has lost the central trunk of an original three forking from the main, and all of its dead branches end in severed stumps. Bark still loosely surrounds parts of trunk and branches; other sections are bare. Its bark looks like black cherry, a forest tree in these parts, but the habit of its growth is more that of an old orchard cherry tree. Snow lies along its branches. 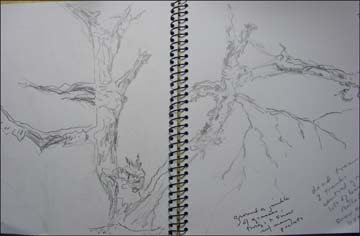 Not a single bird visits at this time of day, though there is an occasional one-note call from nearby, and crows (as always) caw from time to time as they fly over the orchard. Now and then a tiny fir tree releases a part of its load of accumulated snow.
Posted by P. J. Grath at 4:53 PM

I love that you are doing this, Pamela. I am glad you are not afraid to share your drawings. Thinking of the cherry tree, and snow on its branches. Have you been warm while drawing?

I have a lot to learn--about birds and trees, tracking and drawing--but it's all exciting, and yes, I'm keeping warm, too. I will do a post soon for "Books in Northport" on books and clothing that are helping my stillness project this winter.

I love this description: "almost as if the woods to the north and south yearn to reconnect and are reaching across to close the breach."

When you walk through the woods in the Berkshires of MA, you find, here and there, stone fences which remind one that these woods were once cleared for farmland.

Keeping the land free of shrubs and grasses is a full-time job; whenever I see these stone fences I think, "no wonder the farmers left for Kansas!"

Interesting that you picked up on that phrase, Helen. I hesitated over it a long time, because in general I am trying in this blog to stay simply descriptive.

We do attempt to keep our meadow free of shrubs and trees--not grasses! Years ago I seeded one corner in native wildflowers and native grasses. The rest was seeded most recently (but several years ago now) in rye and then not mowed for another year. Keeping out invasive autumn olive is a full-time job.

There are very few stone fences in this part of the country. There are piles of stones at edges of fields. More another time, in my other blog, on signs of "the hand of man" on this land.