It is an overcast and windless afternoon, after a sunny, cool morning. The still air is filled with the lightest of insect clicking and chirping, a thin blanket of sound so pervasive it is difficult to distinguish from silence. The air itself feels moist—not heavily or oppressively so—rather, it feels protective, sheltering life. 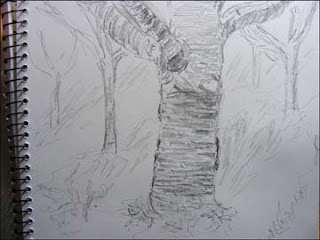 Here by the side of an old dirt road at orchard’s edge, cherry trees full of bloom, grass beneath them studded with dandelions and other, smaller flowering weeds, there should be a steady hum of bees, but clouds and cold have clearly discouraged the large work parties. Tiny flies flit among the higher branches, doing what they can in the way of pollination, and a few larger flies punctuate the quiet stillness from time to time with loud buzzing.

Blossoming trees do not form the undulating expanses of popcorn or clouds of snow usually seen across the hills when bloom comes later in the spring, as it should. The trees flowered too early this year and have been punished by subsequent cold. From a distance—say, from a speeding car—one might wonder if full bloom were yet to come, but close observation banishes uncertainty. Each five-petaled flower, not much larger than a thumbnail, bristles with eager stamens, but many white petals are creased or folded in on themselves at the edges, those edges browning, too. Weary, they look, tired of trying. 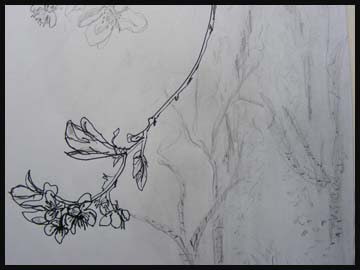 One flower form is repeated along a branch, that branch repeated throughout the tree, and rows of trees full of blossoming branches stand side by side, one after another. Genetically, the trees are clones, but each tree and branch and blossom has met the world in circumstances slightly different, in its own space of air and light and shadow, and has been marked by those differences, resulting in intricacy endlessly repeated in endless variation. 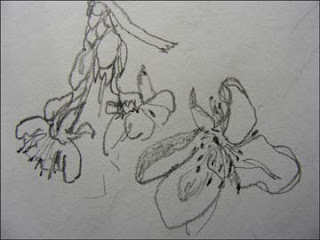 Sounds compose themselves into a simple map: distant traffic far to the north, distant tractor to the south; rooster to the west, woodpecker to the east. The map’s center, for a moment, is one large, buzzing fly. On the south side of the road, someone has made two passes with tractor and tiller over the edge of the field and then stopped. Visible at the western horizon, Lake Michigan lies motionless and patient, cradling its islands in its arms.
Posted by P. J. Grath at 7:49 AM 2 comments:

To Easterners and Midwesterners, accustomed to a verdant, intimate, embracing landscape, the desert can seem alien and forbidding—completely “other.” Cacti and succulents of necessity hoard their moisture, and nature offers little in the way of shelter, other than welcome cottonwoods along courses of water. Hot sun, dry wind, rattlesnakes, scorpions--. 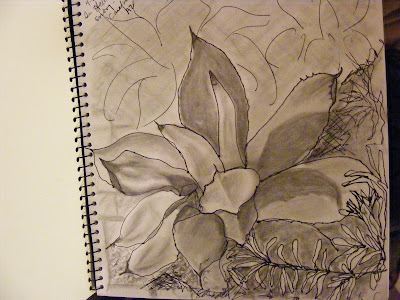 But a desert garden, inside cool walls for shade and enlivened by a quiet fountain, can be welcoming indeed. Finches come to drink at the softly burbling fountain, and other birds sing in brilliantly flowering trees outside the wall. Clay tiles collect and give off warmth on a cool morning. Even the forbidding, thorny cactus plants offer bright flowers, and a soothing oasis atmosphere fills the civilized, bounded space. Here there is no hurry at all.
Posted by P. J. Grath at 6:26 PM 5 comments: