Even before sunrise there is a hum of insects in the white clover. Air and sky are clear, with a few tatter-ended clouds low in the eastern sky. There is no breeze to speak of, so only occasionally does a stalk of clover twitch, a Queen Anne’s-lace stem sway, or a few popple leaves give a palsied shake to show that, beneath the stillness, life quietly continues.

To the east, the view separates itself into five distinct bands. Sky with clouds forms the highest layer. Beneath that comes the dark band of the eastern woods, light only coming through at the tops of a few trees, taller and standing above the mass. Orchard forms the third band, not as individual trees but mostly undifferentiated texture, with hints of rows given in darker tones. 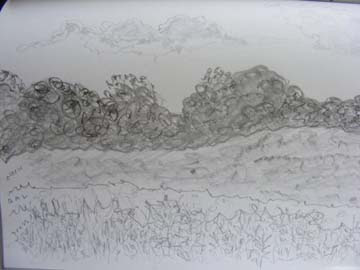 Between orchard and foreground grasses is a narrow band of white, the compressed space of meadow dominated at present by white clover and Queen Anne’s-lace. Meadow plants, besides those two, include many grasses, red clover and alfalfa, wild grape, dogwood, evening primrose, goatsbeard, star thistle, St. Johnswort (blossoms going from gold to brown), goldenrod (its blossoming weeks in the future), and common milkweed. All these draw bees, flies, butterflies, and birds, as well as the less obvious mice and voles. Some of the Queen Anne’s-lace plants are over five feet tall. They hold their heads at tipsy angles, like spinning plates of lace balanced on poles by invisible circus performers.

Predrawn clarity disappears in what seems only a moment as mist rises from the meadow, obscuring the orchard behind. Then, in another moment, the sun has risen above the woods, and the mist evaporates, leaving behind an expanse of light and color, glistening, sparkling with heavy dew. From all directions come sounds of birds and insects—not disturbing the peace of the morning but accentuating it.

A waning moon, still over half-full, rises over the meadow, giving a cinematic “day-for-night” effect to the landscape. The eastern woods form a dark mass beyond the meadow, but moonlit willows bordering the no-name creek to the north show complicated depths, with light branches reaching out beyond featureless background expanse. There is even the slightest grey-green color to the willows, the moon is that bright.

Overhead are stars—not as many visible as on a moonless night, but still too many to count—and between constellations stream slight, gauzy scarves of the Milky Way. The limitless sky seems a star-pricked, domed vault, fading to a light glow at the rim of the bowl that is the horizon.

A very light breeze drifts gently from the east, as if it blows from the moon itself, cool and sweet. Once the wings of a bird beat by, close, no more than 12 feet from the ground. A single cricket chirps and then falls silent, while from very, very far off, from time to time, a dog barks. More as a feeling than a sound comes some low, mysterious, distant rumbling, like thunder many miles away, but the sky is clear and cloudless and remains so.

When the moon is finally above the farmhouse, the metal roof of the house and barns glow white against the dark of everything else, tilted planes of white seeming to detach and lift up like spaceships into the cool air. With the moon’s ascendancy, the stars fade, those nearer the horizon disappearing entirely.
Posted by P. J. Grath at 3:55 AM 2 comments: