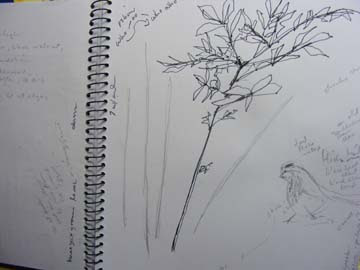 Before daylight the bird chorus began. There is a bank of cloud on the horizon to the east, dark, but low enough that the sun will clear it only slightly later than its light would otherwise reach the meadow. Near the ground cool air stirs gently. It is a morning for looking, watching, seeing; for listening and hearing; for feeling the air in all its subtle movement. For being here.

The meadow was a hayfield for a long time. One summer a decade or more ago it was a cornfield, but since then it has simply been a meadow. It is uncultivated but somewhat managed. One corner seeded with native wildflowers, a strip seeded with native grasses, it is bordered on two sides by young orchard, on one side by wooded bank above the no-name creek, and the fourth side by old farmyard and popple grove. The autumn olive is kept at bay by persistent effort. The meadow was mowed last year, in early summer, but nature wants it to be woods again. Deep-rooted alfalfa, dark green and healthy, persists in spotty clumps through the grass, as do last year’s dry goldenrod, milkweed, and Queen Anne’s lace, but there are also, far out from the more recently seeded areas, wild grapevine, clumps of red osier, and seedlings of maple, black walnut, and box elder. Once in a while a pine seedling appears.

Sounds sort themselves out spatially: rooster to southwest, woodpecker to the east, crows off in the distant south, traffic to the west. Nearer, in the silver maples of the farmyard, robins sing. After a while, though, all other sounds become background to one nearby chik-chik-chik. A very plain sound. The sparrow uttering the dry note perches on a brittle stalk of last year’s milkweed and balances with continual small adjustments, so that any still photograph or drawing of this little bird would be false. Its tail and wings flick constantly, and the bird itself looks about and changes position incessantly, never still for two consecutive moments. Streaky chest, black breast patch. A song sparrow but only giving its repetitive call note. Too early for singing?

Light increases, reaches higher, the dark cloudbank giving way to diffuse, trailing scarves. As at dusk, the cool air rises from the ground, and the breeze gains momentum with the rising sun, as if eager to be in motion after the stillness of night.

Another small bird on another dry milkweed, this one surprisingly more musical than the song sparrow, keeps its head tucked down between choruses but stretches its head, beak upward, to trill its song. These birds have no idea how tiny they are and how big the world is, but the world of this small meadow is all-sufficient to the break of day--the cool morning air, a clump of young black walnut, a nervously twitching sparrow, another bird’s throaty, trilling song, and the clouds evaporating by degrees as the sun clears the tops of the trees.

When farmhouse and barn were new, the house sat high on the hill, and the barn was in the backyard, but since the house was moved downhill, their respective positions have been reversed. This view of the barn is from the west, as the farmer would have approached it in the old days to milk cows morning and evening. The barn would not, however, have been as dilapidated then as it is today, no longer housing livestock. The tall and massive section was originally roofed with wood shingles. Later, sections of metal roofing were laid on over the shingles, but on half of the western slope of the roof the metal is gone, and the shingles have been deteriorating rapidly. Old boards curve and sag inward. Gaping holes appear. Framing and side walls (of vertical boards) are in better condition. 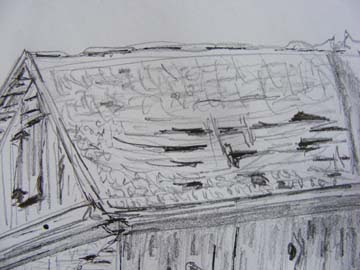 Cows were kept in the shed on the north end of the barn. Inside, troughs in the concrete floor of this section received their body waste. There was a door between the two sections so that old Joe could transfer bales of hay and straw—the latter their bedding, former their winter food when pasture was snow covered—to their stalls. At either end of the tall section of barn are doors high in the walls where the last bales would have been delivered to the tops of the mountains inside by elevator. The cowshed walls were simple boards laid horizontally, but at some point in the barn’s history these had been overlaid with sheets of stamped metal. Now, all these years later, much of the stamped metal has been peeled back and torn off by wind rushing down the hill, so that sections of old board are exposed. One small window is boarded shut, as is the small door on this side, while the other window is opaque silver-grey with the grime of decades. 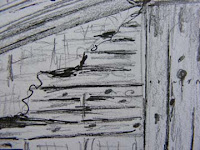 The east side of the barn is kept mowed, but the west face
has been ungroomed for many years. Weeds and large shrubs grow up against the large old doors (not seen here) where machinery and wagons could once go in this side and out the other. This barn was built by a Bohemian farmer and shows his saving ways. Its decay shows the history of farming in Leelanau County: as livestock declined and orchards came to predominate, the old hay barns were no longer needed and not kept in repair. This one was also built without a foundation, its old twisted cedar uprights, seemingly as strong as iron, set directly on the ground, so over the years the barn has settled more and more, wanting to lie down and return to earth. 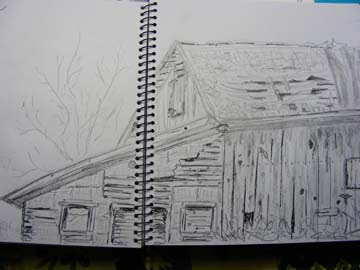 Late evening sun, soon to set behind the hill, warms the wood. The light changes almost by the moment. The lower its angle, the more detail appears: wood grain, knotholes, the subtle shading that weathering has brought about.

Sparrows flit in the shrubs. Mourning doves call.
Posted by P. J. Grath at 5:41 AM 5 comments:

Sand and clay, unpaved, this section of road is rain-braided after yesterday’s downpour. Warm sunshine has brought out birds and insects, all busy about making their respective livings here where a tributary of Houdek Creek is crossed by the lowest point of the road. This tributary creek, very small and easily overlooked at this point, takes a winding and circuitous path, not directly to nearby Lake Michigan but joining Houdek Creek to debouche at the north end of Lake Leelanau, the nearest inland lake. 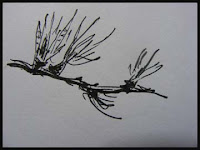 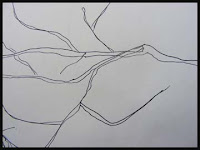 This small scene resists simplification. Every tree limb has its complicated branching, every branch its complex leafings and buddings, and the ground beneath is thick and rich with last year’s dead grasses and weeds, in the midst of which this year’s green shoots spring. At the edge of the road are horsetails, in their small, ferny stage. Sapless stalks of old cattails, brittle and sun-bleached, stand, lean, and lie all about. A small willow clump leafs out in the streambed. Red osiers mix with cattails, and tamaracks sprout this year’s fresh, young green. On slightly higher ground are birch and cedar. Up the hill, maple and beech.

A song sparrow sounds almost like a mechanical bird, as does the nearby rooster over the hill. A call note sounds: Cheet. Cheet. Cheet. Another bird has a song of two notes, Tee-oh! followed by a chirpy trill. A honeybee lands on a blossomless, leafy branch--clambers, tumbles, rests, and moves on. An ant makes its laborious way across the white page of sketchbook, then runs nervously, helter-skelter, toward more familiar footing. On the surface of the creek, water striders jerk and drift, jerk and drift. Sun flashes blindingly on the water.

Green blades, flat and narrow, stream like long hair in the flow, and shadows of air bubbles and small pieces of debris race along the sandy bottom. When the surface trembles in the breeze, even ripples cast shadows. The creek’s quiet song, small and near, is easily lost in the louder sounds of birds and even background noise of a jet overhead or a distant tractor, but the creek goes its own way, uncaring of the rest of the world. More narrow, green blades along its bank lean in graceful curves, striped with sun and shadow. 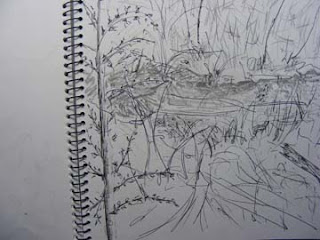 The sun is warm, the breeze slight, cool, and refreshing. A redwing blackbird calls.
Posted by P. J. Grath at 8:04 AM 2 comments: