The air is densely humid, weighing heavily on the warm, fading, late summer world of green, and filling the heaviness is the constant, high-pitched humming of insects, most of it at the far upper range of human hearing, like a ringing in the ears. A steady buzz at the highest pitch is underlaid by a slightly lower trill, and beneath that comes, at intervals, a chirping. Besides the insect songs and an occasional crow’s call, distant “guns” break the stillness from time to time as an overcast day slips toward its end. It is too late in the season for the loud reports to be aimed at frightening deer out of the orchards, so they must be intended to keep deer, raccoons, and crows out of the still-ripening field corn south of Kovarik Road. 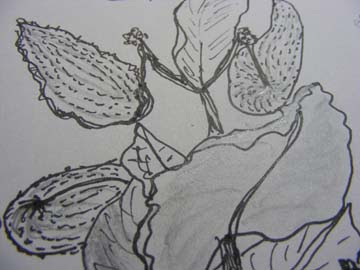 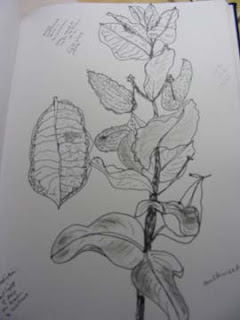 One stalk of milkweed is almost an entire world. Like the air—and like the season itself--milkweed pods, still green but with their green fading to grey and a soft, subtle lavender appearing along their veined bellies, are swelled full with ripening seed. The pods are soft and supple at this stage. They are all business, preparing for another season’s life, but the angles of their connection to the plant stalks is whimsical to the human eye. The leaves are another matter. Taken as an individual, each single leaf is a marvelous instance of nature’s complexity. Rather like the shell of a turtle shell in shape and veining, it displays irregular rows of tiny cells between veins, and along the veins daylight comes through the leaf wondrously. 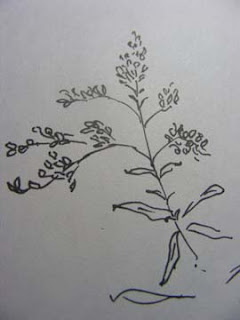 Goldenrod is equally complicated. A single clump of tiny flowers at the end of one branching plant is rich with dusty yellow pollen, and the branch and then the plant must be multiplied many times to get an idea of only one stand among the other late summer weeds—spotted knapweed going all stiff and prickly, Queen Anne’s lace drying to brittle birds’ nests, wild grapevine still green and lush and luxurious as it spreads through the rest. 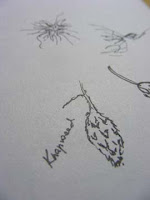 Gradually the grey clouds move off to the east, leaving blue sky and smaller, softer white clouds at day’s end. A tiny breeze rises to stir the mulberry leaves, and the grasses and goldenrod sway. Like a benediction, the last light of day pours over the west end of the barn and the bank of willows along the stream.
Posted by P. J. Grath at 5:56 AM 2 comments:

Day 26 Outdoors: Beside the Blackberries

In the late morning a(lmost midday), sun-drenched hayfield, the air is filled with the buzz and drone of insects and the short, undecided flights of white cabbage butterflies, yellow sulphurs, checkerspots, and grasshoppers. Overhead lazy clouds cross the blue sky in crowds, but only traffic out on the highway, audible above the more immediate and peaceful fields and orchards, hurries forward on a fast trajectory.

It has not been a good season for stone fruits, but brambles have produced abundantly—first raspberries, now blackberries, soon thimbleberries and, on small, weedy trees, mulberries. On the hillside next to Claudia’s road grow the blackberries. Large, luxuriantly green, toothed leaves hide a multiplicity of thorns, borne along sturdy canes as well as on the smaller, fruit-bearing branches. Flowering long ago finished, each former blossom’s sepals bend gracefully downward under a corolla of delicate, dry stamens. Heavy clusters at cane ends hold mall green berries, large ripe fruit, and tiny white stubs where ripe berries and cores have dropped or been pulled away—many stages of life together on each stem. 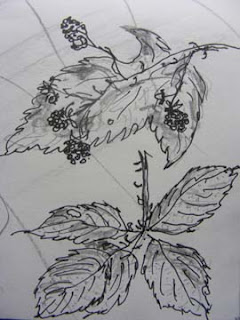 Blackberries and grasses form a dense, almost impenetrable tangle on the hillside, intermixed with wildflowers and small trees, the advance guard of the woods. The fruit is a lure, and those feeding on it will spread the seeds abroad. 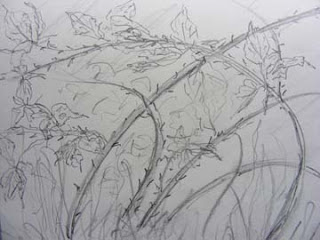