Unseasonably warm weather returned and continues, with blue skies and near-balmy temperatures. The afternoon sun reaches into all parts of Claudia’s Woods, its low winter angle casting long shadows but also striking the leaf litter with warm light. The southeast corner of this small woods is bordered on two sides, south and east, by cherry orchard. At the south border is a wild apple tree, the ground beneath littered with windfall fruit partially eaten by wildlife. To the east, in space formerly occupied by a farm lane, is a large brush pile, surely sheltering rabbits. The woods rises uphill from the brush pile, and a just-visible logging road climbs up and wanders off through the woods.

Deep into the woods there are no birches or popples. Venerable beeches and maples (the latter somewhat smaller in circumference, perhaps because the largest have been timbered off) are the largest trees, and now, in winter, the space between trees seems strangely spacious. (In summer the space will be filled by leafy seedlings and saplings, wildflowers, vines and shrubs.) On the ground, a breeze whispers through the brittle, dessicated beech leaves. It sounds almost like small animals skittering through the leaves. Dry leaves still attached to branches tremble noiselessly, and the upper reaches of the trees move slowly, gracefully, in the wind, their degree of movement varying according to their height and size: the smaller maples’ whole trunks sway, while only the topmost crowns of the beeches are moved.

From the distance comes muffled highway noise. In the middle distance, closer but beyond the woods, crows call. A dull engine roar nearby interrupts the stillness. A tractor? No, there it is—an ATV with two riders. Along the south edge of the woods it goes before disappearing.

No birds show themselves, but once a while one is audible. The first to announce itself utters one short note, then repeats the same note and lets it fall in a glissando. Another bird has two distinct notes, the second a whole step below the first. A third’s voice is a trilling coo. (Beyond, the crows....)

The breeze falls still in the ground-covering leaf litter but continues to move at higher levels. There is a time delay between the air moving below and the treetops swaying above, different horizontal time zones.

On the edge of the woods along the former lane, canes of thimbleberry still bear dark green leaves. On the ground beneath the tall maples and beeches are bright green patches of moss, a few green ferns (splayed flat on the dry leaves), and hopeful spring beauty plants ready either to rush the season or lie low, whichever the weather may indicate in days ahead.

From the southwest comes a sudden, brief canine chorus. The yipping and howling sounds like coyotes, but the deep baying is more like a dog. When the voices fall silent, they do not start up and sing again. 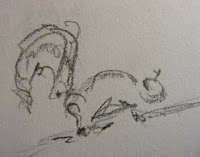 Perhaps those voices agitated a pair of grey squirrels at the eastern edge of the woods, suddenly active and noisy. They climb, race, scold, chase. After the grey squirrels disappear, one small red squirrel begins to chatter and scold, nervously, anxiously, angrily. Up one tree, out on a branch, back to the other side of the tree (not realizing that his shadow still gives him away), down to the ground and up another tree he races, and so on and so on. Constant motion. Never still for two consecutive moments, the squirrel’s body is always a graceful curve, the tail a second curve. Two curves: that is a squirrel.

Shadows shift in the course of an hour. Overhead branches criss-cross in black lines against the blue of the sky, the effect a kind of visual cacaphony with no ordered pattern, but shadows of tree trunks do fall into a pattern, each parallel to the next, all stretching to the north and slightly east.

Different horizontal time zones - and two curves: that is a squirrel. This is a good place to visit.

Being there, seeing, and holding the memories are more important to me in this project than drawing, but yes, Helen, drawing was something I took up during our Florida winters, when I had stretches of uninterrupted time, and it seems appropriate to stillness and seeing. But Gerry, as a drawing my squirrel--what can I say? I need practice drawing squirrels, obviously. What I do like about the little sketch is its spontaneity. You can see I did not labor over it but went for the basic shape and pose. Sometimes my drawings are far too labored.

This is such a good idea, to take an hour a week to sit and observe in a place you love. So much more a deliberate, deeper experience then most of us take the time to achieve.

Dawn, I have several new guides for this year's journey. One I was reading last night is THE ART OF FIELD SKETCHING, by Clare Walker Leslie, and in that I learned the name for how I drew the squirrel: it is a 'gesture sketch,' the quickest kind to do. I will write more about drawing and sketching on my other blog soon.