Earlier today Canada geese in ragged Vs were flying northwest instead of south, and now in late afternoon the breeze is still from the south. Light is muted, colors dull, edges soft. The wind sets a brisk pace, but remains gentle and almost warm. Up on Claudia’s hill, the lilac buds are swelling green, as if they think spring has arrived. Winter is off to a strange beginning.

In an uncultivated edge of field between the old chicken house and the new orchard, trees begin to emerge from the grasses and weeds, amid brambles and small, wild shrubs also proliferating. For the past several years, a chance-sown pine has been growing on the property line. Its pointed tip was lost to a March blizzard, but the rest of the tree—that which remains--is dark, full, and healthy. Closer to the chicken house, a second pine has more recently emerged. It is the same species as the first--red pine--but so much younger that it looks like a different kind of tree altogether. The pines are undeterred by spotted knapweed and don’t mind competing with red twig dogwood and wild blackberries. 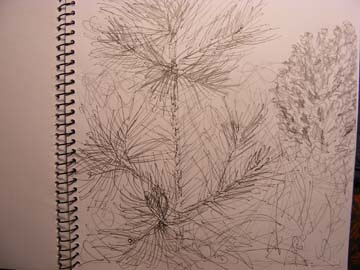 Except for the wind, the countryside is quiet and still this afternoon until a shot rings out. It's muzzle-loader season.
Posted by P. J. Grath at 3:50 AM

Sounds peaceful. Till the end.

That's country life, Dawn. Tranquility can be interrupted any moment. It's all part of the package.