Day 31 Outdoors: Among the Pioneers

Came the wind in the night and blew the leaves off maple trees and lindens. (Ash and walnut were already bare; catalpa yet in leaf.) Wind continued as the sky grew light, glowing rose in both east and west. Ribbons of cloud over the eastern woods now turn from pink to pewter grey.

A band of hardy little popples venture out from the bank above the stream, seeking to colonize the meadow, along with a few small cottonwoods and two or three autumn olives that escaped the spring purge. Among the grasses, purple asters, milkweed, and Queen Anne’s-lace are also the much-less-welcome spotted knapweed. This is how it is with any invasion of pioneers: all sorts pour in. 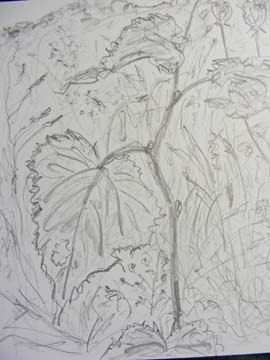 The wind arrives in a series of gusty, irregular waves. Each wave begins first as a far-off drone, rising to a dull roar, and then becoming at last a whispering and rattling and clattering in the closest leaves and grasses. The air feels as soft and fresh as early summer, but its perfume is that of fall, dense with mould and rich with decay. Milkweed seeds escape their pods and chase about, catching on other weeds like bits of wool at the edge of a sheep pasture, fluttering incessantly.

Is that a bird in the willows? A quarrelsome squirrel? The sound goes on and on. Perhaps it is the rubbing of wind-tossed branches. The willows, their heights gradually lighted by the rising sun, toss heavy-leafed branches about like wild horses nodding and shaking heavy-maned heads.

Somewhere out of sight a flock of Canada geese passes overhead. The old farmhouse and barns watch over the meadow with stoic calm. They have seen many autumns. 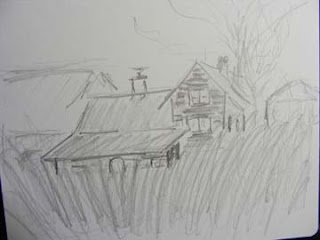